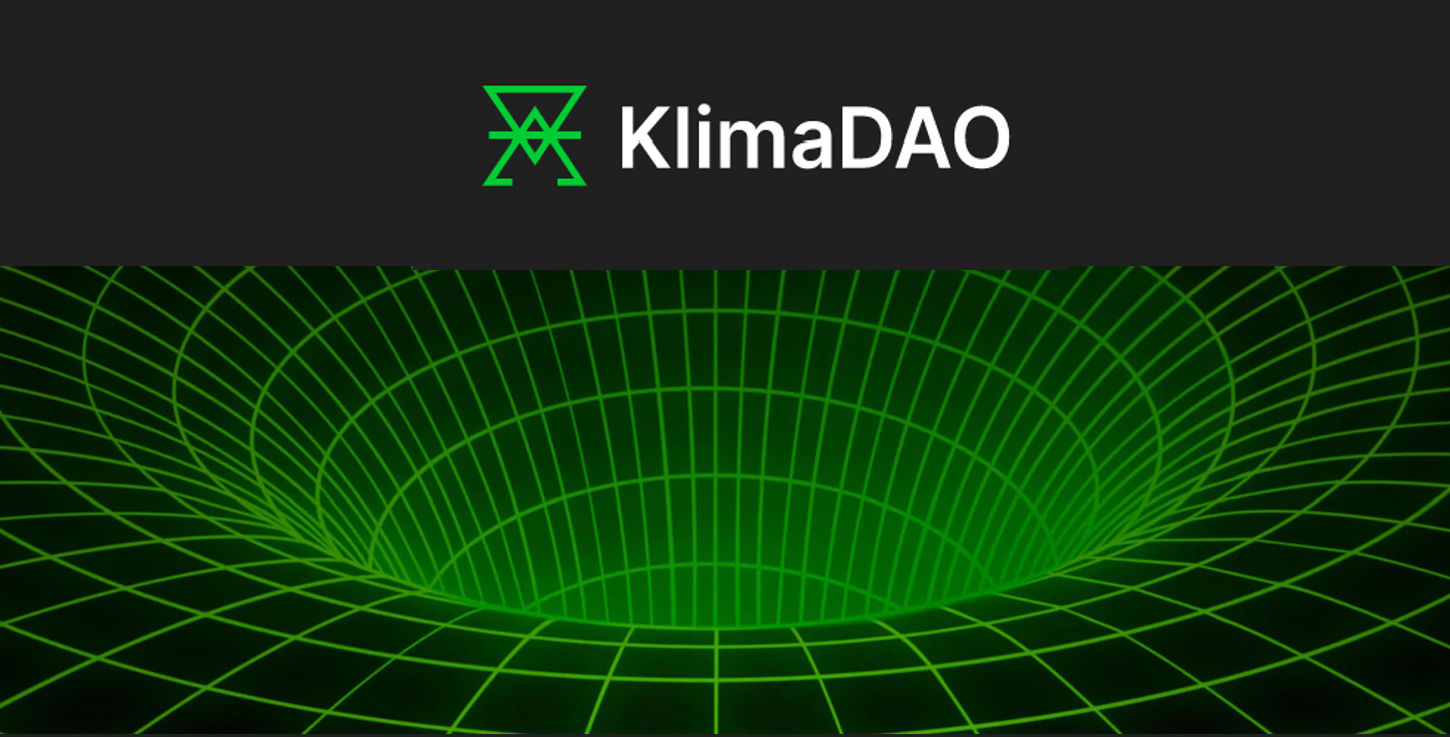 There is a lot of discussion around crypto currency and it’s negative impact on climate change. There are numerous articles out there pointing to the high energy cost of Proof-of-Work or that a crypto transaction is 330,000x more energy consuming than a credit card transaction. (Let’s ignore the errors in these articles for the time being). What if there was a protocol that was advertising itself as helping to fight climate change through crypto? Enter Klima DAO.

Klima DAO launched late 2021 on the Polygon Network. Klima was one of the Olympus DAO forks during ‘ponzu’ season, with a focus on stopping climate change. It aspired to do this through collecting carbon offsets and becoming the bank & market place of the future ‘crypto-carbon economy’.

Klima describes itself as a black hole for carbon credits. But how has Klima DAO done since its launch?

Klima DAO is attempting to help put a market together to properly value carbon offsets. Users are able to participate in the market with the $KLIMA token, a fungible ERC-20 token backed by 1 ton of carbon offsets each. The hope is for the DAO to be the reserve bank of the future ‘crypto-carbon economy’.

The DAO identifies the following problems with the traditional carbon market and offers a way they can solve them:

Klima DAO has 2 main goals. First, to be the future market place that allows for liquid, transparent, and efficient transactions of carbon offsets. Second, to lock carbon offsets in the Treasury and drive the price of them up in the real world. Driving up the price of carbon offsets would, in theory, make it more expensive for companies to purchase offsets to allow continued release of ‘greenhouse gasses’. Then it would be more economically beneficial for companies to find ‘greener’ ways of operating, in theory.

What is a Carbon Market???

Carbon markets are trying to reduce greenhouse gas (“carbon”) emissions by having a limited amount of tradable ‘units’. These carbon markets are proposed in some of the recent international climate treaties, like the Paris Agreement.

A carbon credit is a ‘quasi-permit’ that represents 1 ton of carbon dioxide removed from the atmosphere. Additionally, companies can purchase a carbon credit to ‘make-up’ for emissions from the operation of its factories, vehicles, travel, etc.

A carbon credit gets created by an approved entity and given to firms that show a reduction in current emissions. Typically these are agricultural or forestry practies.

If carbon market gets implemented, regulators would set a cap on how many tons of emissions each sector can release. In order for a high polluting company to keep producing while staying under the cap, a company would need to purchase credits in the open market. Any company that is under the cap, can sell its additional credits. This would, in theory, add additional costs to high emission producers and be a source of profit for low emission producers.

Currently the carbon markets are almost entirely voluntary, but is on track to be nearly $7 Billion.

So far, lots of buzzwords. How does it all actually work?

Each $KLIMA token is backed by one Base Carbon Tonne (BCT). Each time a $KLIMA token is minted, one BCT needs to be locked in the Klima DAO treasury. BCT is the reserve asset of Klima DAO, ie – not going to be in any of the carbon market regulations.

BCT represents a basket of tokenized carbon tons from recognized carbon offset creators. The offsets are brought on chain through the one-way Toucan Carbon Bridge to make an on-chain credit. Each Toucan credit, TCO2, is a unique carbon offset with its own project name, serial number, type, vintage year, and verification standard. A BCT is minted after a TCO2 is locked in the Base Carbon Pool.

Klima claims that each BCT provides intrinsic value to the token, since TCO2 is a tradeable item. Additionally, Klima makes note that BCT is not a stable asset. Therefore, unlike other Olympus forks that held stable assets in the treasury, there is a risk of the value of the treasury decreasing over time.

There are key mechanisms in the Klima ecosystem, which will be familar to anyone with experience in Olympus forks like Wonderland DAO.

The Klima DAO follows many of the governance protocols you are likely familiar with.

They use a 3 of 5 mult-sig wallet for the Klima treasury.

The DAO has a plan to become completely decentralized in the future. They allow for Klima Improvement Proposals (KIPs) and there is a discord for discussions any proposals. There is also a Klima DAO forum where the Request for Comment (RFC) periods begins. If enough support is shown in the forum, the proposal can move to a formal vote.

KIPs can begin in the Klima KIP forum, by the Klima team, or by an external thrid party or carbon offset trader. The protocol gets voted on by the tokenholders.

How has Klima been doing? First off, the price action on $KLIMA has been ugly.

On the carbon offset side, Klima has been able to store over 17.2 million tons of carbon credits in its Treasury since launch. They claim this is the equivalent of 3.75 million cars worth of annual emissions.

On one hand, Klima DAO has been able to successfully remove what appears to be a meaningful amount of carbon credits from the marketplace. This fulfills its stated goal of being a black hole for carbon credits as it still holds every TCO2 it has received.

However, on the other hand, the price action of $KLIMA has beenugly. Klima has been a black hole for most investors money. It appears it may have done a better job sucking in and destroying token holders capital than carbon credit offsets.

Klima is a unique spin on the Olympus forks and is attempting to tackle an issue many people care about. Additionally, it may provide some pushback against the claims crypto is all bad for climate. Lastely, if the carbon offset markets become more widely used and/or forced through regulation, Klima may be in a good position to profit off the increased usage of the carbon market in the future.

However, for the time being, Klima DAO appears to have a hard road ahead to get back to growth and profitability.