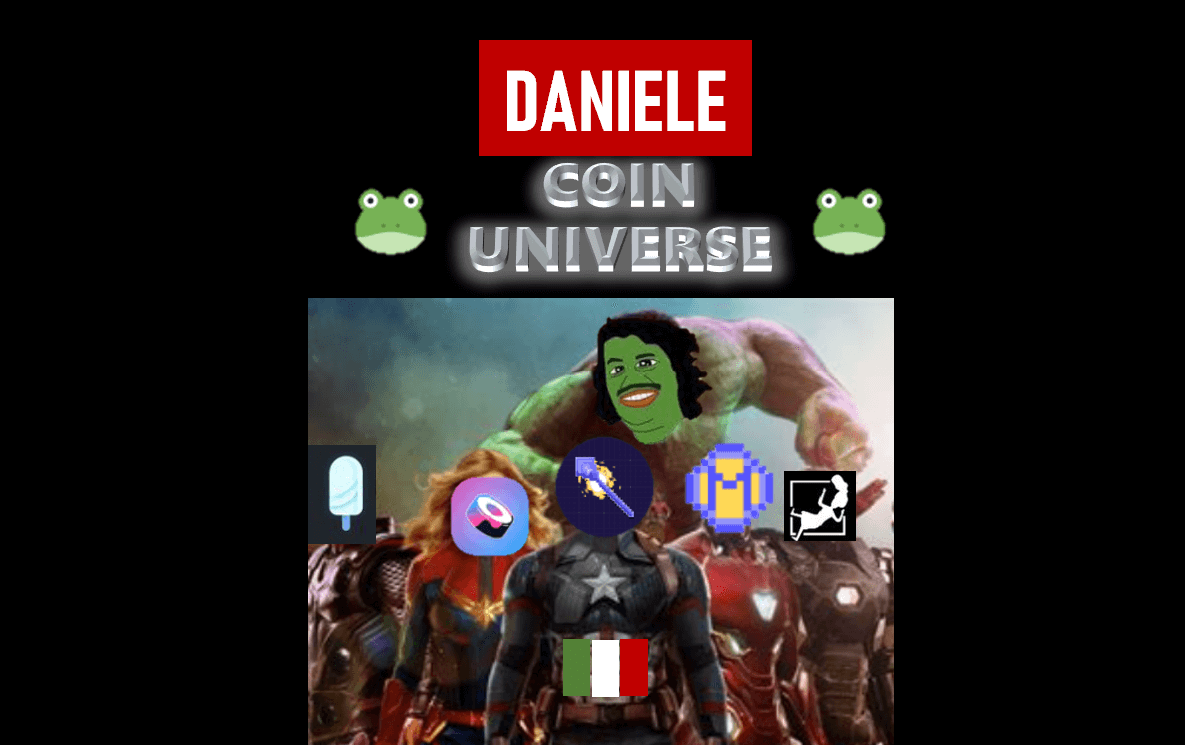 Daniele Sestagalli (Daniele Sesta) has seemingly been popping up all over the crypto world the last few months.

There is a lot going on across the protocols in the Daniele Coin Universe (DCU), and it seems like a constant state of flux.

Additionally, Daniele is quite a character and has a strong following of supporters (“Frog Nation”) so he pops up in crypto news too.

Most recently, it was when Bankless suffered a self-inflicted wound trying to goad Daniele into…honestly I’m not sure what the end game was…But Dani has cult-like status of his supporters and the support of lots of heavy hitters in the cryptoverse.

Daniele is the current face of 4 coins and also a new potential figure of Sushiswap. Therefore, despite all the entertainment, Daniele is leading nearly $7 Billion of market cap (not including SushiSwap).

These tokens make up what has coined (pun intended) as the Daniele Coin Universe, or DCU. (Unfortunately, I did not come up with the DCU nor could I track down who did, but if someone wants to claim it, DM me).

This post is an introduction to the 5 coins in the DCU for anyone who wants a birds eye-view before digging in more to any specific tokens.

What are the Coins that make up the DCU?

The DCU is made up of 4 coins on 3 platforms, with the potential to include a 5th. The current market cap of the 4 main coins ($MIM, $SPELL, $TIME/$MEMO, and $ICE) is around $7 Billion (from CoinGecko).

We will start with Magic Internet Money ($MIM).

$MIM is a USD pegged stable-coin that can be bridged across many L1 and L2 chains easily from abracadabra.money. You can currently bridge $MIM across Ethereum, Fantom, AVAX, Arbitrum, Matic, and BSC.

The real magic (pun intended) of $MIM is that you receive it in exchange for depositing collateral on abracadabra, and your collateral can be interest bearing tokens.

What does that mean? It means you can take a token you have deposited in a vault earning interest, and use that as collateral to take out a loan. As your collateral grows (from the interest), your loan-to-value (LTV) improves.

Basically, your loan becomes more ‘safe’ over time as the chance of liquidation decreases due to your LTV decreasing.

Spell is the governance token on abracadabra.money. It is currently available on numerous chains in both its $SPELL form as well as in staked spell $sSPELL.

$SPELL & $sSPELL holders benefit from fees generated from abracadabra from the lending mechanism. There are fees & interest charged when someone places a token as collateral on the platform in order to borrow the $MIM stable coin.

Many people will borrow against their L1 Eth tokens to get $MIM as an easy way to bridge to other chains. Borrowing against your tokens is also not a taxable event.

$SPELL is trying to move to being a zero emission coin and just burned a ton of supply which improves the value of holders too.

Wonderland is an Ohm-fork with its main token $TIME that turns into $MEMO when staked. The Ponzu market has had a rough go recently, but the Wonderland war chest is still in the $2B range.

Recently, Wonderland has moved to offer a wrapped version of the staked $MEMO ($wMEMO), as the main token. By wrapping $MEMO, you are able to bridge your $wMEMO across chains in order to do things like farm it.

To be honest, the end use of all this liquidity as well as how long the APY can stay in the 65,000%+ range is unclear. At one point a really big music festival was floated as one scheme (I still don’t know if that was a legit thought)

Popsicle is a cross-chain yield aggregator with the token $ICE. It essentially is automating how the LP pools are balanced to maximize rewards for the LPers while also making more efficient markets for traders.

Fragola is for the Uniswap V3 Optimizer and Limone is trying to hunt for the best LPs on all DEXs for you.

The actual mechanics of all this is well outside the scope of this article, but you can find the details through the popsicle link.

Popsicle was originally released and hacked for ~$25mm. With the relaunch, part of the goal was to make everyone whole through emissions and this was achieved.

Sushi is the newest potential addition to the DCU, although not one Daniele came up with.

SushiSwap’s core team had a public falling out, which ultimately resulted in the CTO Joseph Delong resigning. This was after a core developer left the protocol a few months earlier.

Daniele saw the opportunity and submitted a proposal for revamping the platform, team, and tokenomics. It is yet to be seen is $SUSHI will be added to the DCU officially.

Sushi is a major DEX with its own token, $SUSHI. You likely have used SushiSwap in one form or another if you have spent much time on crypto.

There are a couple themes in the DCU. First, there is a clear focus on being cross-chain and trying to be the tokens of choice when bridging.

Second, Wonderland provides a lot of potential liquidity in the DCU and seems like a wild card for what it will be used for.

Third, there is a lot of potential ways token holders can maneuver in the DCU. For instance, taking $wMEMO has a high-APY collateral, borrowing $MIM and using the $MIM to LP, potentially using Popsicle to optimize your returns.

If you own and stake $SPELL & $ICE, you are keeping any fees from the above in the ecosystem and your staked tokens benefit from the above.

Conclusion on the DCU

This is not an endorsement or recommendation to purchase any of the discussed coins, but just an introduction to one of the first full ecosystems with unique takes on protocols that I was made aware of.

I will be continuing to monitor how this all unfolds. If you want a deeper dive into DCU and Frog Nation, check out this three part series at the DeFi Education Substack.

At a minimum, Daniele is an interesting character who tells interviewers he tweets and ships while on the toilet. So even if the DCU doesn’t end up succeeding in its ambitious vision, it will be entertaining to follow.