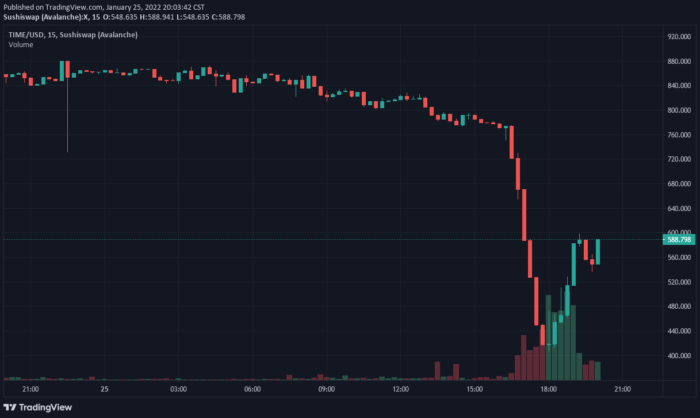 Dani Sesta liquidated – As the Frog Nation sits in the smoking crater of what used to be Wonderland’s market cap ($TIME), wondering what happened and why devs did not do something, this quote returns to mind. Founder Daniele Sestagalli had previously soothed fears of falling prices in the bear market by assuring users that the treasury would use limit orders to maintain the price of $TIME at its risk-free-value backing.

If left to its own devices, the protocol itself would not stabilize prices until $1, when the protocol minting/buyback mechanism kicks in. This is far below the theoretical value of the token due to its treasury backing.

Not only were limit orders not in use, but the falling price of $TIME, and by extension its composable, staked, counterpart $wMEMO, triggered a series of cascading liquidations. Founder Dani and treasury manager Sifu have both been liquidated for over $15 million USD and $1.6 million USD, respectively.

Unfortunately, the story does not end there. Dani’s Etherscan transactions show repeated borrowing of $MIM on Abracadabra against his own protocol’s tokens, cashing out the $MIM for $USDT, maneuvering the $USDT through this alt account, then sending the $USDT to CEXs, presumably for sale to fiat. At this point, he has cashed out almost $20 million USD to Bitfinex.

A team member borrowing against their token allocation to generate cash flow is not unheard of. Joseph Delong, formerly of Sushi, famously got liquidated on his $SUSHI-backed borrows. What is rare is cashing out such a massive amount, quietly, offchain. 20 million dollars is not living expenses, unless you’re trying to buy a mansion.

The formerly cohesive Frog Nation of Dani’s followers and adherents is in turmoil following this development. It’s a bad look to get liquidated on your own platform. As of yet, there is no proof of foul play, but the move casts a poor light on Daniele. $TIME will tell whether Dani Sesta’s liquidated wMEMO is the smoking gun in a case for malicious intent by the beloved founder, or whether some innocent explanation is at play.